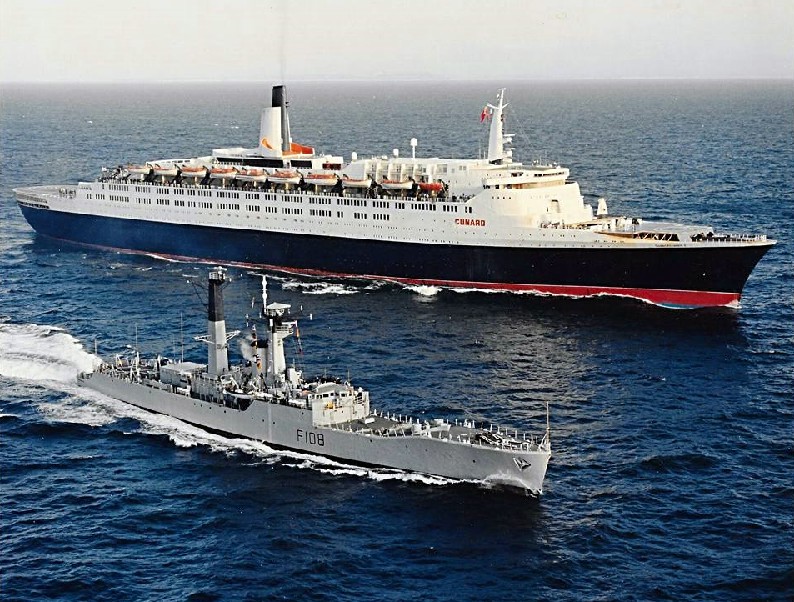 1970 Far East, taking part in the Indonesian Confrontation. Then the Beira Patrol and eventually to the Bahamas where she rescued 148 Cuban refugees.

1975 - 1979 Refitting at Rosyth for service as Trials Ship for A.S.W.E.
The extended refit of HMS Londonderry saw some considerable changes to this Rothesay class anti submarine frigate. She was fitted out as a trials ship for ASWE. A third mast was fitted to carry the TYPE 1030 STIR radar, the gun was removed, a new propulsion system was fitted to check the quietness of waterjets and a CAAIS system was fitted to improve the ability to handle the amount of information being generated. I was involved in co-ordinating the CAAIS fit with the Dockyard technical officers. CAAIS stands for Computer Aided Action Information System and was a Ferranti designed system. STIR stood for Surveillance and Target Indication Radar and was developed into Types 1022, interim STIR by HSA and 1030 by Marconi using back to back antennas. 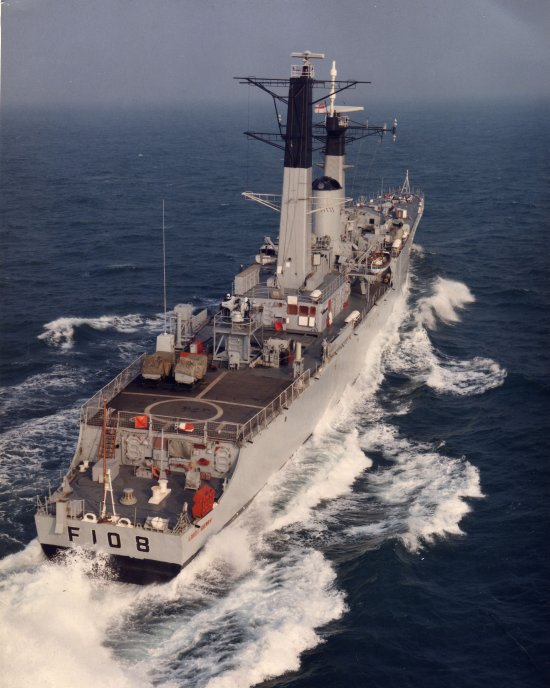 Derry shows her paces in her new configuration. 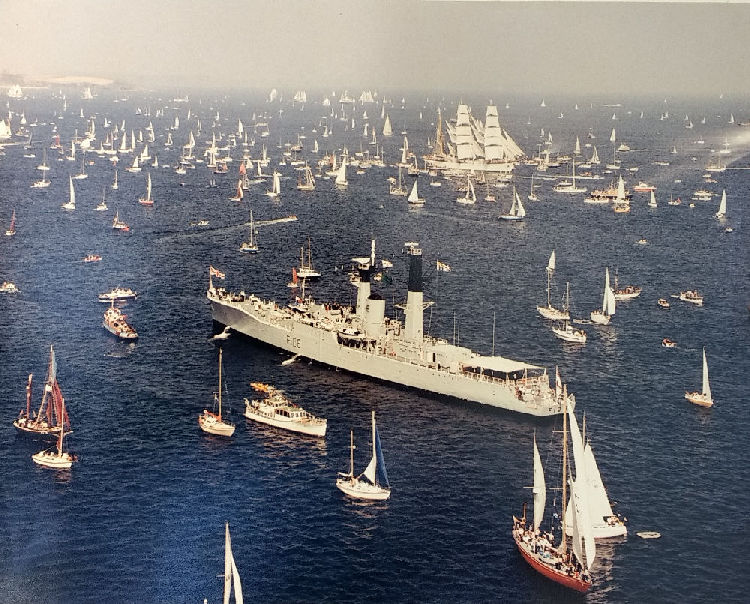 Photograph donated to the website by David Prescott in memory of John Prescott his brother; who served aboard the ship in the eighties leaving the navy as a Chief Petty Officer. David does not know any details regarding his brothers rank aboard the Derry other than he was a CPO. Any information would be gratefully received. Londonderry is flying the Royal Standard of the Duke of Edinburgh who was aboard to review and start the Tall Ships race.

The early 1982 visit across the Atlantic was by way of a "Paying Off" Cruise. Londonderry borrowed a 30mm Rardon cannon to enable her to take up the role of West Indies Guard Ship. The 1983 crossing was as consort to HMS Fearless in her role as Dartmouth Training Squadron. As a result of the effectiveness of the two ships operating together, the Derry was programmed to accompany Fearless in 1984. However, Fearless's involvement in the Lebanon crisis in late 1983 meant that she was not ready to resume the role of Dartmouth Training Squadron in time. The 6th Frigate Squadron stepped into the breach and a reformed Dartmouth Training Squadron, comprising HM Ships Berwick, Londonderry, Plymouth (F6) and  Torquay, sailed in company across the 'pond'.

Due to pay off initially on 31st March 1982, the ship was immediately reactivated as the Dartmouth Training Ship and accommodation modified to suit. She continued in this role until Fearless returned from the Falklands conflict and had had time to recover.

'Slava' refers to the Soviet warship of that name which the Londonderry shadowed down the Atlantic coast of Ireland. 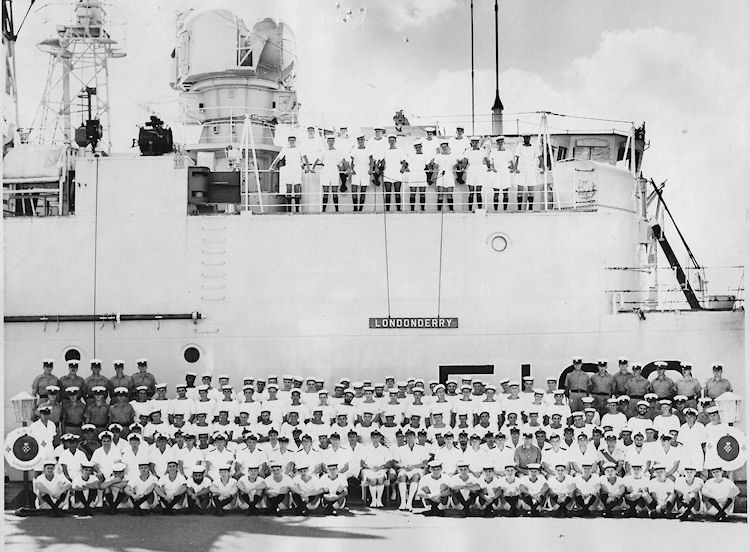 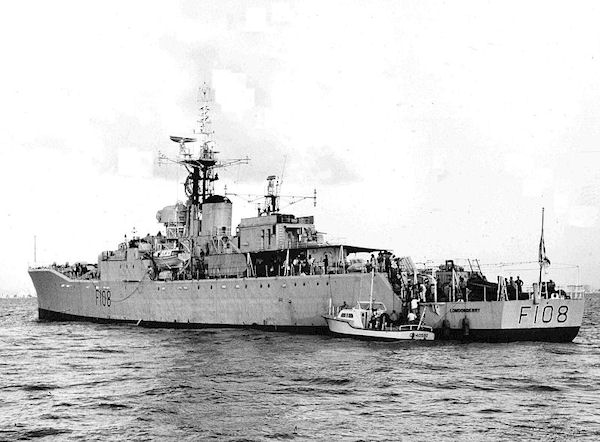 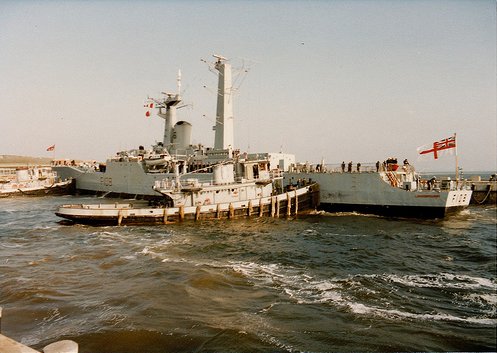 Derry being helped alongside at Tampa, Florida, U.S.A. 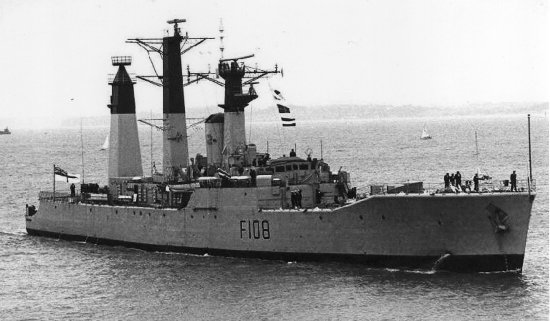 HMS Londonderry emerges from a four year refit in Rosyth.
She now has three masts,
a distinction she shared with HMS Victory and HMY Britannia
Picture: PO(Phot) Len Cobbett. 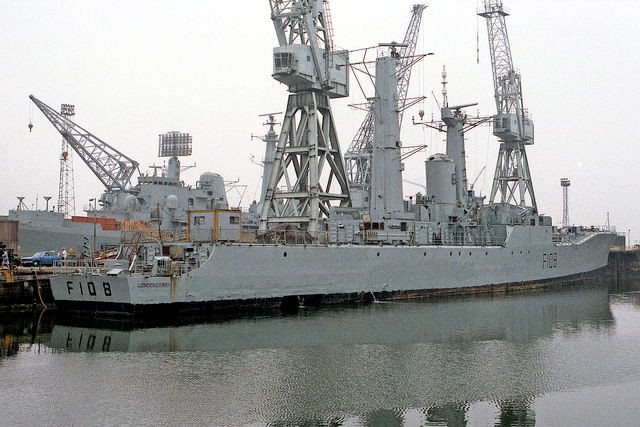 On June 25th 1989 HMS Londonderry having come to the end of her useful life was disposed of as a target. Sunk by a combination of missiles, bombs and gunfire in position 59° 45' 12"N 009° 59' 6"W (JMO Training Staff, RAF Turnhouse, 4.7.89). Off the North West of Scotland, (Chart 1129 - Banks North West of the Hebrides) near a charted depth of 1141 metres (624 fathoms). The chart below is an extract from the official wreck chart of the area provided by https://www.wrecksite.eu/Wrecksite.aspx under licence from the UKHO. 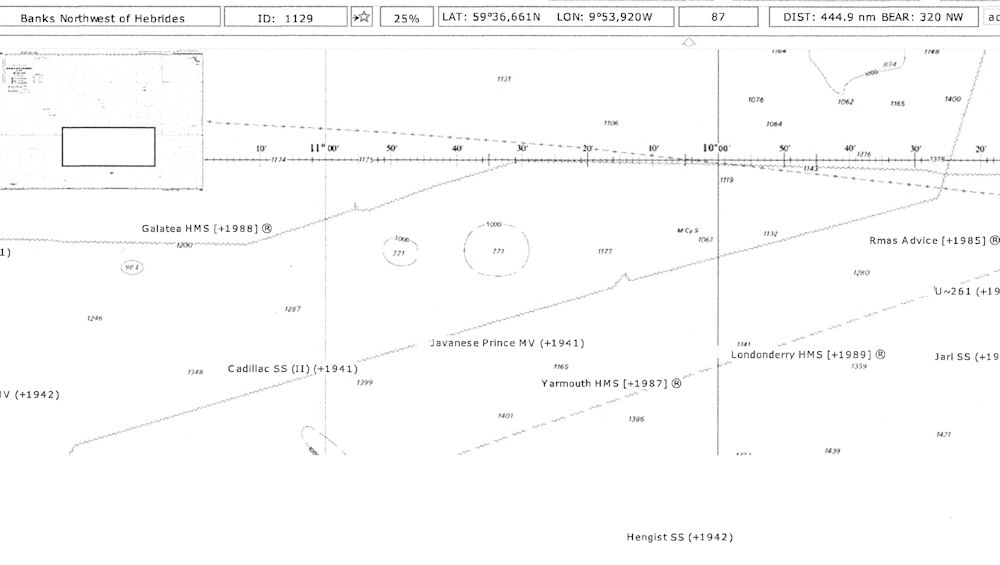 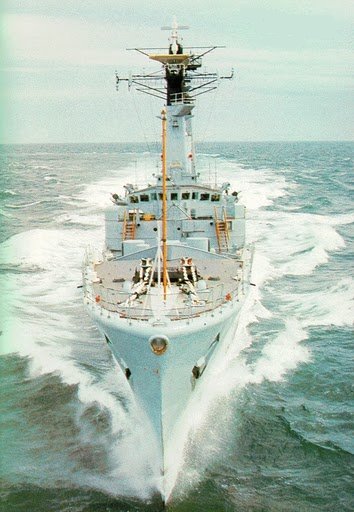 'Derry' Cutting the mustard
Any further pictures or details will be much appreciated.
webmaster@hmslondonderry.org